Turkey’s Nuclear Dreams are a Nightmare for the International Community 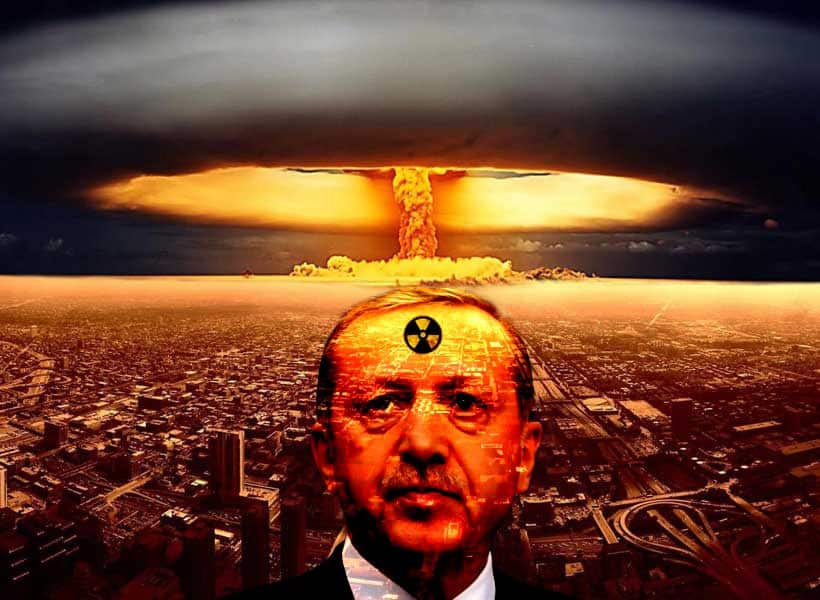 Turkey’s role in the Greater Middle East is under international scrutiny after asserting its intention to become a regional middle power in the emerging multipolar international system. To achieve this it gradually moves away from the West (and the North Atlantic Alliance) in an attempt to pivot east (Eurasia). Purchasing the Russian made S-400 missile system was the onset of this risky foreign policy shift that is becoming progressively a headache for its Western allies. Turkey’s ambitions however are restrained by the lack of a nuclear arsenal which would serve as a vehicle to its independence from the NATO shield.

The significance that Ankara attributes to nuclear weapons is evident from the relevant statement of Turkey’s President Recep Tayyip Erdoğan in September 2019 at the Economic Forum of Central Anatolia. “Some countries have missiles with nuclear warheads, not one or two. But (they tell us) we can’t have them. This, I cannot accept” he stated and added “we have Israel nearby, as almost neighbors. They scare (other nations) by possessing these. No one can touch them.” The Turkish President concluded saying “we are working on this”, thus implying that they their efforts to acquire a nuclear arsenal is already in progress. The Turkish President also clarified his intentions to the UN General Assembly in 2019, when he criticized the “Treaty on the Non-Proliferation of Nuclear Weapons” (which Turkey signed in 1980), since it prohibits countries such as Turkey to develop nuclear weapons. It should be stated that Turkey has signed the “Comprehensive Nuclear-Test-Ban Treaty” back in 1996. However, the revisionist goals of the Turkish leadership, yield little hope on Turkey keeping its obligations on both treaties.

“I hope it will not happen, but Turkey seems to be in quest of it” said Dr. Moritz Kütt, a nuclear weapons expert and researcher at the Institute for Peace Research and Security Policy of Hamburg University. He also added that “nuclear weapons will not calm the security situation; instead they will bolster up Turkey’s ‘ego’. Nuclear bombs guarantee a place in the forefront of geopolitics. An idea that Erdoğan likes a lot.” More concerned appeared the Israeli political scientist Yakov Kedmi who clarified that, it is only a matter of time before Ankara acquires a nuclear arsenal and it is impossible to prevent this. It is also reminded that on February 15, 2010, former Israeli Prime Minister Benjamin Netanyahu had warned former Greek Prime Minister George Papandreou that, Turkey  already had the capability to become a nuclear-weapons state.

This concern intensified after aljazeera.com brought to light information which suggested that Islamabad intends to covertly support Turkey’s nuclear-weapons program.

Such alarm bells have been ringing since 2015, when German secret services discovered that Turkey appeared to be following Iran’s footsteps. It was revealed that President Erdoğan demanded back in 2010 to secretly start the construction of uranium enrichment facilities. In addition, there are suspicions that Turkey has already attained enriched uranium originating from a former Soviet republic.

Notably, Turkey was also involved in the activities of Pakistani nuclear smuggler Abdul Qadeer Khan, who sold thousands of centrifuges (their electronic systems came from Turkey) between 1987 and 2002 in Iran, North Korea and Libya.

The prerequisite of a nuclear weapons program is the ballistic missile program which aims to develop missiles that will carry nuclear warheads. The Turkish-made Short Range Ballistic Missiles (range >1000km) are already in production while there are reports of producing missiles with a range of over 1000km. In addition, emphasis should be given to the announced Turkish space program.

-Firstly, because it will support the volume of data related to the satellite navigation of the Turkish UAVs, at the same time with the ballistic missiles.

-Secondly, because it will facilitate the development of missiles with a range of 3500km or greater (Medium Range Ballistic Missiles or larger).

The threat imposed on the states that lay within this range is obvious without considering the possibility of launching the ballistic missiles from surface ships or submarines. Thus the Turkish space program should be closely monitored to clarify whether it is covertly used to support its nuclear weapons program.

The construction of the Akkuyu Nuclear Power Plant (as well as those planned to be built in Sinope and in Eastern Thrace) is certainly not coincidental either. This aims to reduce Turkey’s energy dependence on one hand (in 2020, approximately 72% of its energy demand was met through imports) and on the other hand, it serves as an induction in the nuclear expertise. Dozens of Turks are already studying Nuclear Engineering at Russian universities since 2015.

Russia has every reason to provide the know-how for the construction of Turkey’s Akkuyu Nuclear Power Plant in an attempt to hinder NATO’s unity. However, the Russian-Turkish opportunistic cooperation will not feed the latter’s ambition in attaining nuclear weapons. Their competing interests collide in many cases. Russia wouldn’t want to see a nuclear arsenal in such close proximity to its borders. The leader of the Liberal Democratic Party of Russia Vladimir Zhirinovsky is convinced: if Iran and especially Turkey have nuclear weapons, they will turn against Russia. This does not suggest that Turkey will not achieve its aim. On the contrary it means that Turkey will have to overcome many obstacles set by important states with interests in the wider region, such as Israel, France, Egypt, Saudi Arabia and the UAE. Above all, Turkey will have to face the growing conflict of interest with the US. There are many reasons upon which Turkey will not be tolerated as nuclear-weapon state. As abovementioned, this will instigate its geostrategic autonomy, causing the existing Euro-Atlantic security architecture to disintegrate. In addition, it will trigger a nuclear arms race in the wider region. All of these destabilization fears have long been addressed by the US.

Consequently Turkey’s alleged choice to approach the co-religionist (and less pro-Western under the leadership of Imran Khan) and willing Pakistanis for supporting its nuclear-weapons program (1 , 2 , 3 and 4), does not come as a surprise, since it has little or no other option in this venture. The two Sunni forces share the same strategic goals in the Mediterranean and India which derive from their close historic and economic ties. Their defense cooperation agreements (1 , 2 , 3 , 4 , 5 , 6 and 7) are already expanding as a result of the events in Afghanistan which contributed to further strengthen their relations (1 , 2 and 3). The director of the Middle East Center for Reporting and Analysis, Jonathan Speyer, stresses that “Ankara’s strong and burgeoning strategic ties to Pakistan are causing international concern regarding the possibility of a transfer of nuclear weapons knowledge between the two countries. Turkey already has the will and the raw materials. This knowledge is the factor it currently lacks.”

Drifting apart from the West

Nonetheless, Turkey’s eagerness to embark on a nuclear-weapons program should be seen in the bigger context. There are clear indications that the Eurasianist ideology creeps in Turkey’s top-ranking policymakers. Analysts identify this ideology as a Turkish version of the Ba’athism in the Arab world. The Eurasianists argue that Turkey’s interests lie outside the Western world and therefore should join the “anti-imperialist” camp led by Russia and China.

When speaking about Afghanistan, Turkish president Recep Tayyip Erdoğan  said: “Imperial powers entered Afghanistan; they have been there for over 20 years. We also stood by our Afghan brothers against all imperial powers.” A similar statement made by the Pakistani Prime Minister Imran Khan, revealed the common grounds of the two Sunni forces in their ideological (and religious) beliefs. He said that the Taliban are “breaking the chains of slavery.” Some would argue that both statesmen are influenced by the jihad theorist Sayyid Qutb (author of the influential book “Milestones”) and his idea of victimization of Muslims by foreigners or “imperialists”. He believed that western nations are attempting to undermine Islamic empowerment thus jihad is the tool to liberate the “suppressed” Muslims from the “imperial powers” (see also 1 , 2 , 3).

It is evident that the alleged new venture of Turkey in the nuclear weapons field is in all cases a cause of serious concern for its Western allies. Its decision to drift away (1 and 2) from the North Atlantic alliance and become a strategically autonomous Eurasianist power, presupposes the acquisition of a nuclear arsenal. This will lead to a reflexive nuclear arms race of key states in the wider sensitive region, hindering the already fragile balances and undermining the existing Euro-Atlantic security architecture. Such prospect cannot be reversed by false hopes on a softer policy after a leadership change in the Turkish elections of 2023, or worst by transactionalism that will boost Turkey’s confidence. It is arguable that Turkey’s overambitious geopolitical balancing act is pushing the limits of its diplomatic, economic and military capabilities. Therefore restraining its activities in these fields (especially its military hardware / technology as well as the space, missile and nuclear programs) by the states affected most and the US, is most likely to weaken its eagerness and tame its revisionist goals.